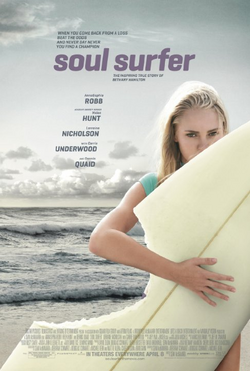 13 year-old Bethany Hamilton is a champion surfer who was born to be in the water. But after a fun night out night surfing and what should be a fun day in the water, she is attacked by a shark and loses her arm. Rushed to the hospital, she remains calm, and maintains her faith in God. Now she has to re-learn how to do everything with only one arm - including how to surf. It will take her friends, family, and her Christian faith to get her back into the water, but if that is where she is meant to be, she will find a way to get there.

In 2003, teenager Bethany Hamilton (AnnaSophia Robb) lives in Kauai, Hawaii with her parents Tom Hamilton (Dennis Quaid) and Cheri Hamilton (Helen Hunt), and two brothers, Noah Hamilton (Ross Thomas) and Timmy Hamilton (Chris Brochu). All are surfers, but she and her best friend Alana Blanchard (Lorraine Nicholson) have grown up with a passion for the sport and enter a competition. Her church youth ministry leader, Sarah Hill (Carrie Underwood), is disappointed when she has to withdraw from a planned missions trip because of the contest.

Bethany and Alana place first and third, respectively, while the second place winner, Malina Birch (Sonya Balmores), proves to be resentful. Bethany invites both girls up on the winner's box with her, but Malina ungraciously refuses. The Rip Curl surfwear company offers to sponsor her and Alana in competition.

The night before Halloween, Alana and Bethany sneak off with some friends to go surfing. Later while Tom goes to the hospital for knee surgery, both girls go surfing with Alana's father Holt Blanchard (Kevin Sorbo) and brother Byron Hamilton (Jeremy Sumpter). As Bethany dangles her left arm in the water, a tiger shark appears out of nowhere and sinks its teeth into it, biting it off near the shoulder. Holt gets Bethany out of the water and puts a tourniquet on her while Byron calls 911. An ambulance meets them on the way to the hospital. Just before starting Tom's knee surgery, Dr. David Rovinsky (Craig T. Nelson) is called to the emergency room to treat Bethany. Besides losing her left arm, Bethany also lost 60% of her blood and David calls her survival a miracle.

Bethany's injury prevents her participating in the Rip Curl photo shoots, but she wishes Alana well. Inside Edition, a television program, offers to provide a prosthetic arm that is cosmetically perfect and has bendable joints, in exchange for an interview. Bethany angrily rejects it when she learns it will not help her surf as it is not weight bearing, due to the size of the stump of her arm. The onslaught of paparazzi also proves to be a great strain on her family and their privacy. The Hamiltons are grateful to Holt for his quick thinking and decisive action that saved her life.

Bethany perseveres and, after a recuperation period, gets back in the water and learns to surf with one arm, eventually re-entering the competition. She tells her rival Malina not to take it easy on her, and rejects a five-minute head start offered by the judges. She does not perform well because she cannot stay on the board long enough to go out and catch a competitive wave and Malina wins. Disheartened, she decides to give up competitive surfing. Bethany sees the effects of the 2004 tsunami on television, which places her own problems in perspective. She decides to surprise Sarah by joining the youth group on another mission trip to help the devastated people of Phuket, Thailand. They are understandably afraid of the water, including a little boy. Bethany decides to go into it with a surfboard, hoping this will coax him into it. It works, and the realization that she can use her gift to inspire people motivates her to take up surfing again.

Tom rigs a handle on her surfboard which she can use to prevent falling off while paddling out to the waves, which is not prohibited by the competition's rules. He also voices the belief that she possesses a great surfer's instinct for sensing when the best waves will form. She enters the national championship, thanks Malina for treating her as a serious competitor, and performs respectably, though she is still chasing third place. Suddenly, with only minutes left on the clock, the waves die down and all the surfers can only loiter, waiting for the waves to start back up. Tom's belief in his daughter's instinct is proven when she is the only one to sense a big wave forming, and she alone paddles out. When it forms, the others cannot get out in time and she catches it just as the horn sounds. If it is in time, she will win, but the judges rule that the time has expired. Malina is the winner, but she has finally gotten over her differences with her, inviting her up on the platform to share first place.

Subsequently, Bethany lets the reporters interview her. One asks her what she would do if given the chance to undo the loss of her arm. She says that she would still lose it because she can embrace more people now than she ever could with both. The film ends with real video of Bethany surfing after the attack. Also showing video of interviews and special appearances that she has made.

Retrieved from "https://soul-surfer.fandom.com/wiki/Soul_Surfer?oldid=4347"
Community content is available under CC-BY-SA unless otherwise noted.